While great things can be accomplished by just one person, in Guelph-Wellington a collaboration between seven local organizations is delivering a food revolution as part of Provision Coalition’s Re(PURPOSE): A circular food experience initiative.

Watch a one-minute video animation about this story

"One company’s food waste is another’s main ingredient – that idea itself isn’t new. But working with several companies to identify connections, savings and efficiencies, and then bringing them all together for one project? That’s something exciting and unprecedented.”

This partnership is one of many underway as part of Guelph-Wellington’s joint vision to create Canada’s first technology-enabled circular food economy: a reimagination of how food is produced, distributed and consumed.

The idea was spurred by Provision’s collaboration with Wellington Brewery, says Mereweather, which was keen to explore new opportunities to repurpose its unavoidable waste. “From there, it wasn’t a big leap to a fully-circular, locally-produced meal.”

Brent Davies, CEO of Wellington Brewery, credits the company’s Marvin Dyck, Head of Brewing and Quality, with driving its involvement in the circular meal partnership. Dyck was motivated by a desire to repurpose Wellington’s spent malt grain, says Davies.

“In the past we would send it to local farmers for livestock feed. Working with Provision, we hit upon the idea that we can reuse it to feed people – a much better idea in the sense of circularity.”

Now Wellington is sharing the ‘waste wealth’, sending spent grains to Grain Revolution, where it is used to make bread, and supplementing the feeds of Izumi Aquaculture's fish with Oreka Solutions’ black soldier flies. Its contributions play a central part on the plates served to hungry diners at The Neighbourhood Group of restaurants: Wooly Pub, Miijidaa Café & Bistro and Park Grocery Deli & Bar.

It began with the idea of a simple fish burger. From there, the sky was the limit, says Court Desautels, president of The Neighbourhood Group of restaurants and Borealis Grille & Bar in both Guelph and Kitchener.

Starting October 15, 2020, seasonal dishes will feature products from this circular partnership. The Wooly menu includes a sourdough breaded trout with fries, Miijidaa has a cured steelhead trout gravlax appetizer with sourdough and potato horseradish sauce, and Park Grocery offers a hot smoked trout sandwich with potato chips. All have the option to be paired with an ice cold Wellington beer.

The common black soldier fly is a key component in the diet of the delicious trout on the plate. This fly is 37 per cent protein, has antimicrobial peptides and cannot spread disease.

“Their needs are simple: to mate and die,” says John Alexander, General Manager at Oreka Solutions. “We incubate their eggs until they become little larvae. We then provide them with a rich feed mix and 15 days later, we have big larvae.”

Oreka Solutions is an ag-tech company harnessing the power of insects to provide healthier animal feed. At the heart of its operation is the black solider fly. The larvae eat anything, says Alexander, including Wellington Brewery’s spent grain. Some larvae mature into flies who will then lay more eggs and keep the cycle in motion. The rest are ground into fish food and delivered to customers like Izumi Aquaculture, where it enhances the diet of their resident Steelhead Trout.

Steelhead Trout don’t have much of an appetite during the hot summer, but with the fall season descending on Guelph-Wellington, they are biting. Their food of choice: a nutritious feed containing a four per cent Oreka black soldier fly supplement, says Wayne Izumi, Owner of Izumi Aquaculture.

Izumi Aquaculture’s fish will grace the plates at three of The Neighbourhood Group’s restaurants. They are a welcome contribution to the partnership, given the company’s commitment to deliver environmentally-responsible farmed fish products.

“There has always been a circular element to what I do. But this collaboration with Provision is definitely a much deeper and cooler incarnation of it. It’s doubly appealing: building community and eliminating waste.”

The Grain Revolution is a Guelph bakery specializing in handcrafted bread made with organic grain and wheat flour. Its products are served at restaurants throughout the region and will occupy pride of place on the circular fish menus at Neighbourhood Group’s restaurants.

McRae contributes a sourdough bread that uses spent grain from Wellington Brewery. Since grain doesn’t provide as much ‘fuel’ as in a classic sourdough, he’ll also be collaborating with Escarpment Laboratories: “We’re ‘hybriding’ up some of their spent yeast with my culture to get a bit of a boost.”

Escarpment will create unique flavour profiles for Grain Revolution’s bread: “In making our liquid yeast, we create a waste product, essentially beer, that was just going down the drain,” says Richard Preiss, Co-Founder, Escarpment Labs. “We wanted to be smarter about our waste and how it could be used.”

What is a fish meal without the “chips”? No stone was left unturned by Provision: foliar fertilizer from Izumi Aquaculture (fish poop!) is being applied as fertilizer to crops at Smoyd Potato Farm in Fergus. Their potatoes will be incorporated into all three of the meals: The Wooly’s golden fries, Park Grocery’s potato chips and Miijida’s potato and horseradish cream.

Provision’s Re(PURPOSE) initiative is all about seeing food differently through collaborative partnerships that transform by-products into new food products and experiences. For one month, starting October 15, Guelph-Wellington residents and visitors are invited to The Wooly, Park Grocery or Miijida to experience North America’s first gourmet circular meal. 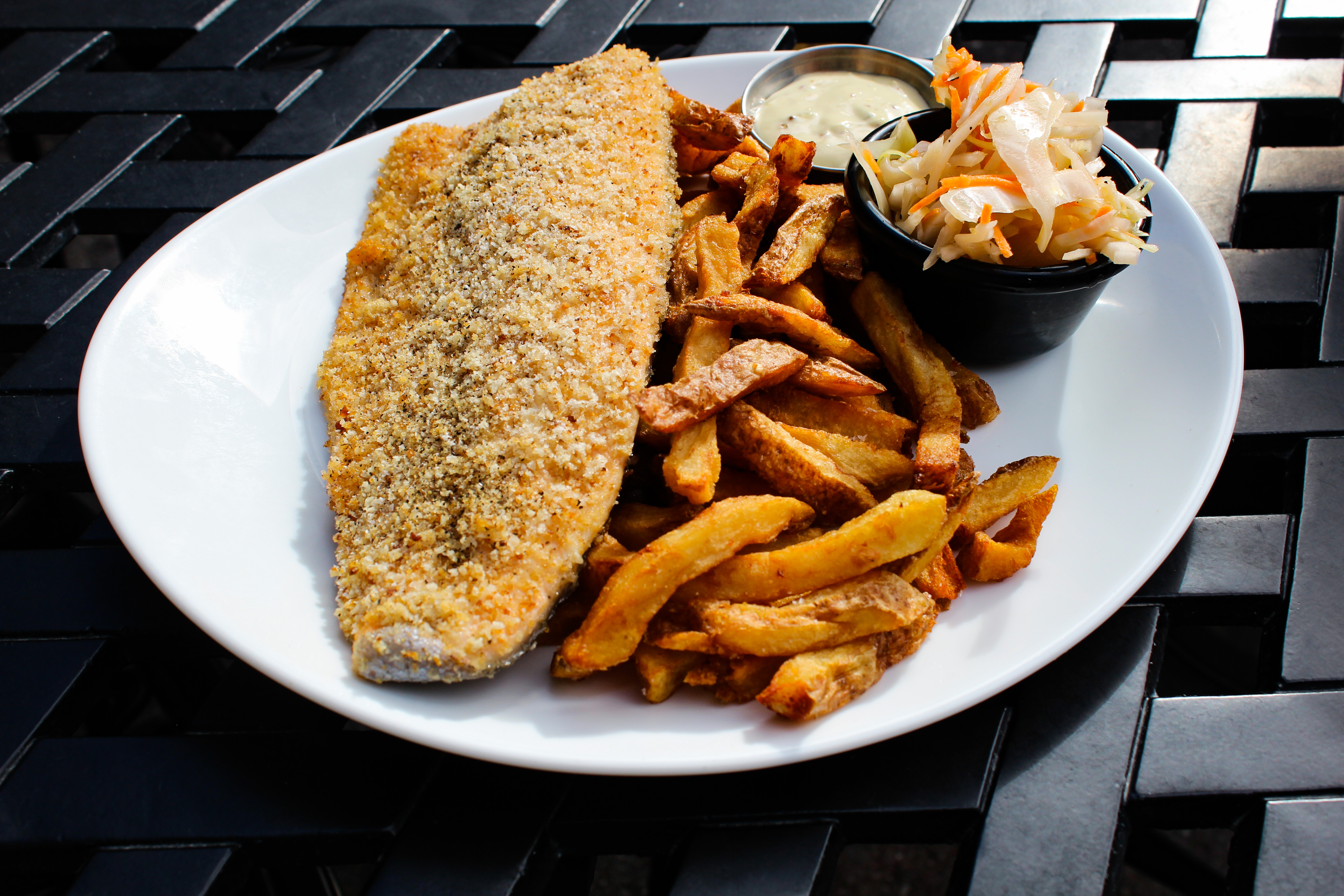 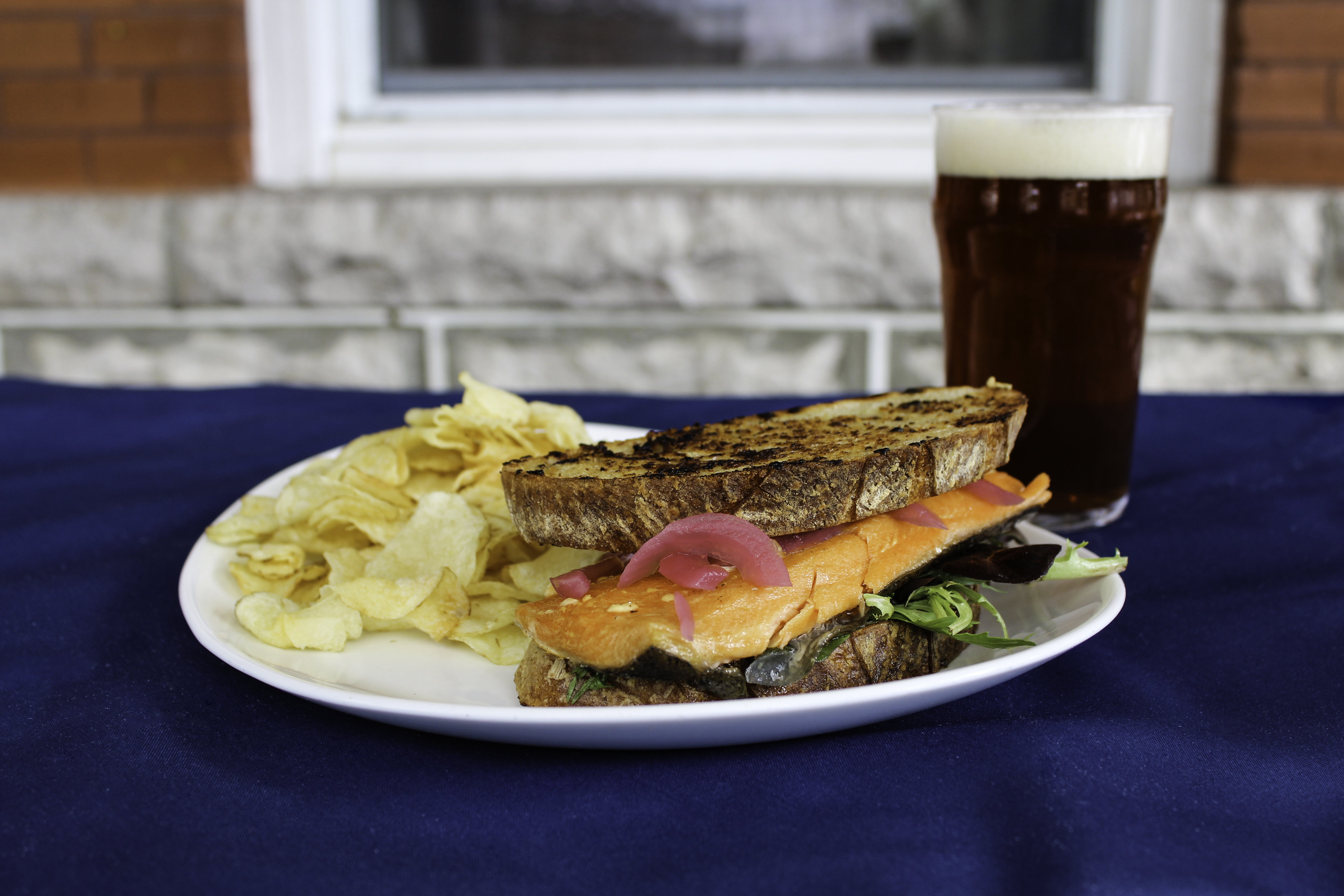 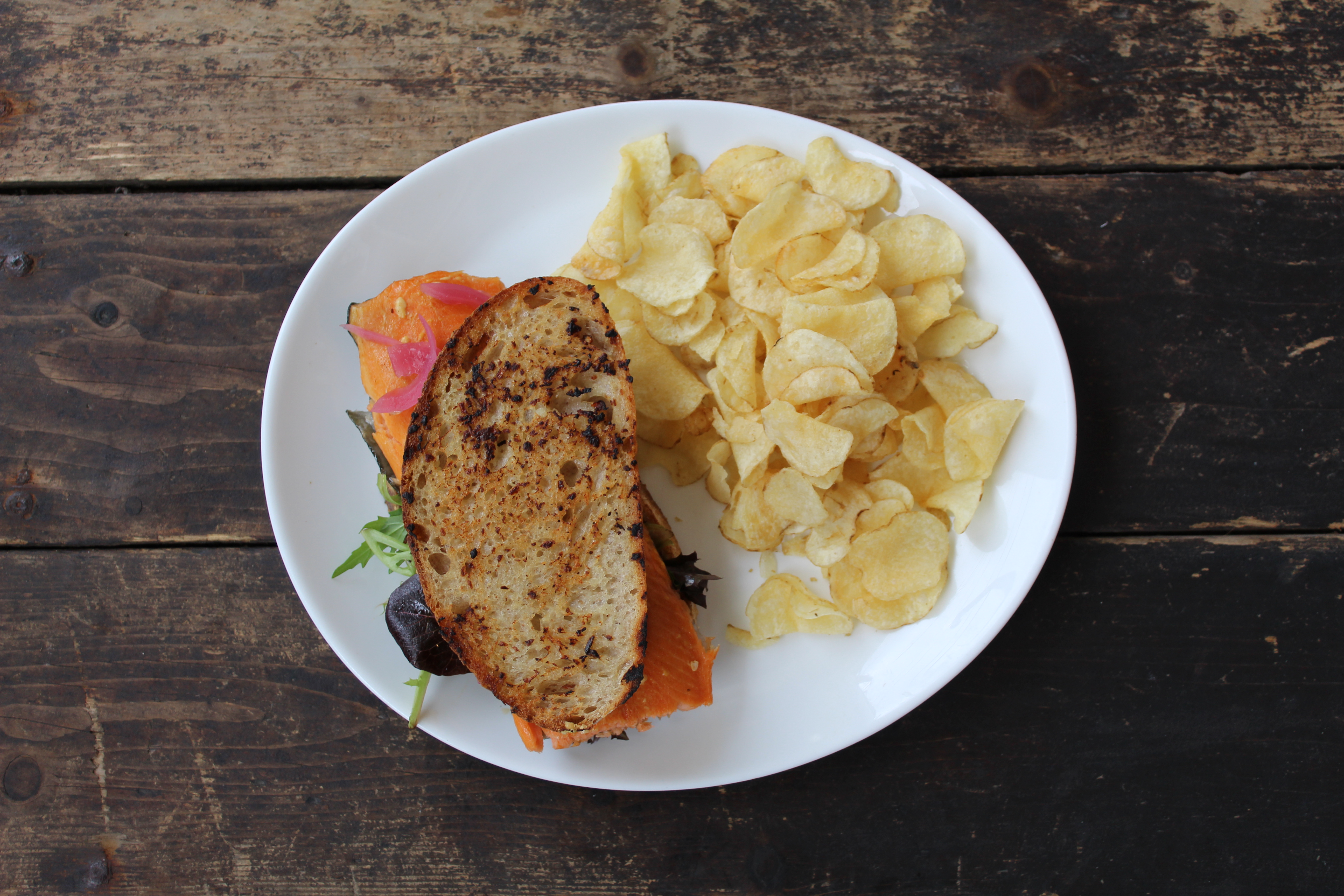